Welcome ladies and gentlemen, this season of “The Next Great” which will focus on none other than the Hall of Fame Laker, Kobe “Bean” Bryant. Since Kobe’s retirement he’s mentored several NBA superstars including Giannis Antetokounmpo, Kawhi Leonard, and Jayson Tatum, all in hopes that they would unlock their mamba mentality. On this show, we will scour the basketball world to find whose game would elevate to new levels after an offseason with the Black Mamba. There are no requirements for this season’s show so you will see professional and college players on this list.

Mitchell is quite possibly the most fierce competitor of the listed bunch. We all know his NBA story; he hit the ground running leading his team to a second-round run and becoming Twitter’s choice for Rookie Of The Year. The fire he showed all season to get his team to that position is why he’s the perfect candidate to work with Kobe.

At 6-3 with a 6-10 wingspan, he has the size and strength to take most guards in the post. His length combined with his vertical leap will allow him to get the separation needed to pull off Kobe’s patented Jordan like moves. A few weeks of drilling footwork and breaking down the angles of the game should give Mitchell more than just the will to be better than the man in front of him.

With the Kobe work in his bag, it’ll be hard to stop a young player who’s more than proficient at every level of the game. Becoming a Kobe disciple will only bolster his offensive creativity, solidifying his hold as the West’s premiere young guard. Just imagine Mitchell catching the ball in the post leaning back to feel the defender, taking two quick dribbles, faking left then turning over his right shoulder for a fadeaway as we all yell, “KOBE”!

Lavine is the Chicago Bull’s high-flying star and primary scorer. He’s putting up all-star numbers to start the season and is showing he’s just as explosive as he’s always been. He’s also averaging at least two “mama there goes that man” highlights a night powered by incredible dunks.

Zach’s game relies heavily on his speed, quickness, and of course slam dunk contest winning bounce. Under the tutelage of Kobe, he can turn all those tools into one of the deadliest tool sheds in the league. Zach already has the ability to find holes in the defense by using his lightning quick first step. Being able to see how the defense will unfold without using his speed will only help him as he gets further into his career.

Those same tools can be just as deadly when Zach decides to go into the post. He’ll have the quickness to use Kobe’s footwork in a way that will throw defenders’ equilibriums in a blender. If defenders can somehow stick with him after the fancy footwork he’ll definitely lose them once he turns over his should for Kobe’s signature turnaround jumper. Just imagine Lavine catching the ball in the post leaning back to feel the defender, taking two quick dribbles, faking left then turning over his right shoulder for a fadeaway as we all yell, “KOBE”!

Andrew Wiggins
Why Wiggins: To complete his destiny

This contestant was the highest touted prospect coming out of high school that this list has to offer. Maple Jordan, Wiggins nickname out of high school, has been entertaining crowds with his athleticism since the height of the basketball mixtape era. He was compared to some of the games greatest including Kobe, but has yet to reach for that ceiling. Wiggins has been coasting on his athleticism and who can blame he’s reached borderline all-star status off raw athleticism alone. It’s tempting to rely on just that when you’re still able to compete against the best but just think of what could happen if he spent an offseason with Kobe.

The real reason Wiggins is a contestant for this chance of a lifetime is the Jimmy Butler debacle. What made Kobe “Kobe” wasn’t the jump shot, it’s not even the rings, it’s his mentality. Of all the players on this list, Wiggins could use the mamba mentality the most. He’s been judged as aloof and not engaged his entire career in spite of that think about Kobe being able to get him to finally flip the switch. An engaged Wiggins could unlock the defensive potential we saw in him on draft night. He has more physical tools Kobe Bryant ever had so there is no telling what he could become.

Wiggins was built to take on Kobe’s skill set. The ball fakes, the post-game, shooting off the dribble are all things that would enhance his game. Learning to create space without relying on his athleticism would make Wiggins a nightmare. He’d see plays steps before they happen and it would be nothing a defender could do besides swat at the dust cloud he’d leave behind. Just imagine Wiggins catching the ball in the post leaning back to feel the defender, taking two quick dribbles, faking left then turning over his right shoulder for a fadeaway as we all yell, “KOBE”! 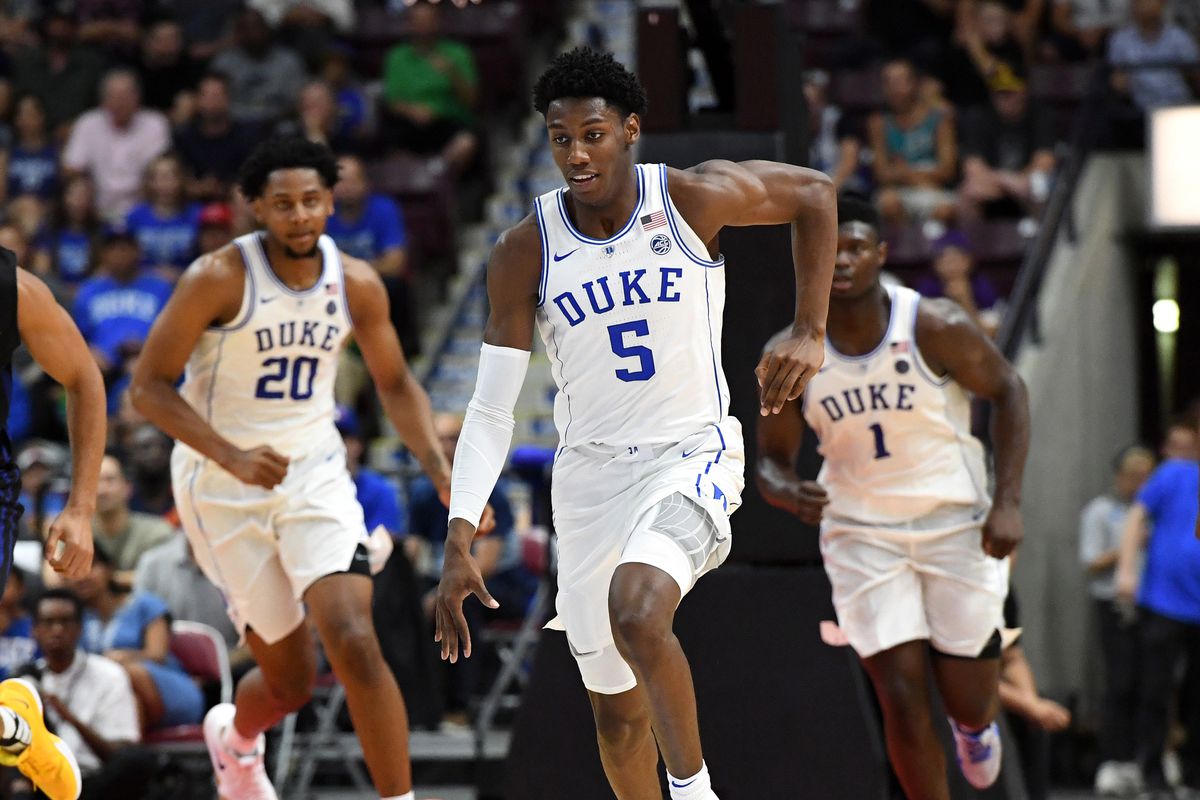 Barrett is the youngest competitor in our search for the Kobe Disciple but is one of the most accomplished. Training this young man should be like looking in a mirror for Kobe. We’re looking at a 6-7 competitor whose drive for winning helped him push a less talented Canadian squad over what seemed to be a powerhouse USA FIBA U19 team with two 2019 projected lottery picks and three guys selected in the 2018 draft.

Seemingly more polished than an 18-year-old Kobe, Barrett will show us what made him the consensus high school player of the year at Duke. After the debut performance he had at Duke and well, it becomes even more enticing for Kobe to get in his ear. Establishing yourself as a proven commodity is useful when working with Kobe. His youngest trainee without the last name Bryant is Jayson Tatum, who blossomed into a go-to scorer in last year’s playoffs.

Barrett already has a scorer’s mentality partnered with a win at all costs mindset but picking Kobe’s mind would make him one of the most dangerous prospects we’ve seen in years. A literal student of the game working with a master of his craft could turn one lucky franchise’s fortune for the next seven years. We could truly see the second coming of Kobe with a Barrett-Bryant mentorship. Just imagine Barrett catching the ball in the post leaning back to feel the defender, taking two quick dribbles, faking left then turning over his right shoulder for a fadeaway as we all yell, “KOBE”!